Drunk Lady Passes Out And Poops On Herself At Bachelorrete Party (Graphics, But Viewers Discretion Advised)

Those sharing the photos claim this took place at a bachelor party, and what we’re looking at is a stripper who passed out after having one too many drink.

There have been many past incident of people pooping on themselves when they’ve had too much to drink. The other cause of such is if the person’s drink was spiked.

Some people on social media have analysed the consistency of semi-liquid poop, pointing it to a poor diet. According to them, it’s a combination of fried food and alcohol for days on end. Well, probably.

Also, another person said the hot pile of mess may have been resting in her bowels for some time now. three— to — four days at the most. And the additional meal and alcohol at the bachelorrete party forced them out uncontrollably after she passed out.

Whatever the case may be, the photo is not for the faint-hearted. So brace yourself.. 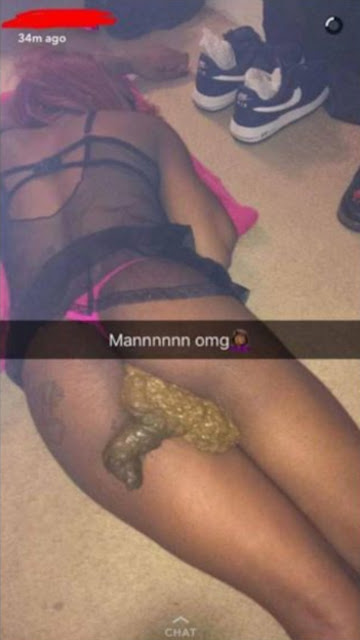 What Went Down At The Premiere of ...