Mistake I Made With Yaya Toure – Pep Guardiola Admits

Admin
0
Spaniard, Pep Guardiola has apparently admitted the mistake of sidelining Yaya Toure owing to the long-term feud between both parties. 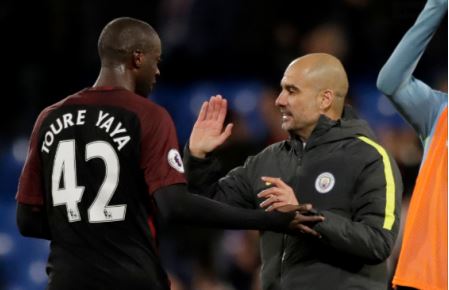 Manchester City manager, Pep Guardiola, has admitted he may have made a big mistake in freezing Yaya Toure out of the team.
Toure scored a match-winning brace, as City defeated Crystal Palace 2-1 on Saturday, after being left out for almost three months by the Spaniard.

The Ivorian midfielder will be unavailable when Guardiola travels with his team to face Borussia Mochengladbach in the Champions League on Wednesday, as he was excluded from the squad for the competition.

“I spoke in the last month, many times with Yaya because he was my player with Barcelona, I know him very well. So I know how he is like a player.

“As a player there is no doubt — if there was a doubt he would not be here. He is another guy to compete with our midfield players and increase our level,” Guardiola said.