How to Deal with Horrible Bosses 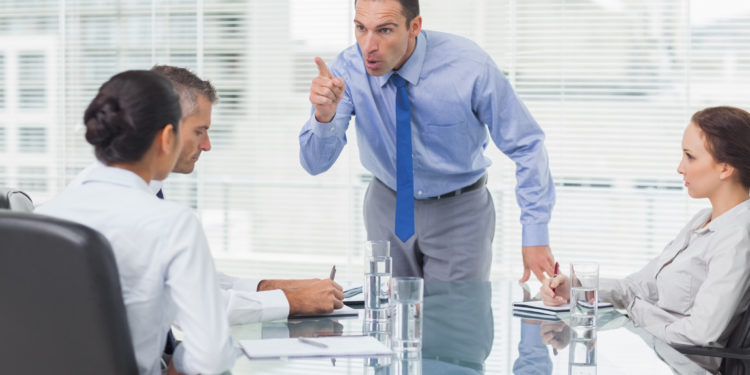 “The boss is coming” Everyone scampers to their seats and an uneasy silence ensues as he/she enters. “I hate my boss…” a statement which rings almost true for most employees of one-man businesses in Nigeria mostly (not to say that there aren’t horrible bosses in the corporate world). Asides tweeting about your horrible boss or talking/ranting about them to neighbours, friends and on social media, you can try to deal with things in a constructive manner, albeit challenging as it may turn out to be.

In Nigeria, there are different types of bosses, even though some are nice people sometimes.

Angry executive pointing out his employee

This is the most common kind. Stress is the major cause of their being horrible. They could be nice people outside the office though (sometimes). They could be suffering stress being pressured about performance by senior management, the drive to get more than they can from their employees, pressure from not meeting up with expectations, they have in their heads-realistic or not. You the employee along with other employees get to feel fallout from that, even though your performance sometimes had nothing to do with it.

When you see them, they don’t smile much, except on rare occasions and are almost always angry. You can deal with them by always trying to be calm, polite, business like, achieving your goals/targets consistently, and trying to lighten their load by asking to help sometimes (be careful when you do this, as they might want to take advantage of the situation).

These ones are blowing hot one minute and cold the next minute. They could be laughing with you all today and tomorrow, they are unrecognizable, barking orders and being a general pain in the butt. They leave their employee/subordinate in a perpetual state of confusion. They are usually manipulative, with fluctuating dispositions and always keeping you guessing and second guessing about yourself and your abilities and their feeling towards you.

You can deal with them by remaining unaffected by their shifts in disposition. Do not let them see you flustered. Neither should you think out loud about their fluctuating manner. Remain impassive and unemotional and they’ll soon realise that you’re not up for playing their games.

Plain evil. They insult and criticise for the fun of it. they never miss an opportunity to make someone else feel small and insignificant. Everyone in your workplace is terrified of them. Unfortunately, nobody has the confidence to say it to their face. This is also very common in Nigeria here. They are loners majorly, who are always happy to see you afraid of them.

To deal with them, watch carefully to see what kind of situation is most likely to coincide with your boss having a temper tantrum. Does she come in fuming every morning? Try being kind, having something nice, maybe a cup of coffee ready for them. Or is it on Friday when that are super-tired? Try to make sure you and your team are at the top of your game, turning out good results. Be kind.

Happens sometimes here. They are rarely seen at the office but still yet know all the goings on in there. They try as much as possible to be unavailable/uncontactable, despite saying they are.

You can deal with these ones by being at your best always. They could drop in like a thief in the night. Do your job and never do what you never want to be caught doing. If you need to catch up with him, schedule a meeting with him face to face, when he drops by. That way you have that at the back of your mind.

No matter the type of horrible boss you have, you need to be consistent in your approach. Remain true to yourself and work ethics. Accept your boss for who he/she is and try to get along with them until it probably gets too much. If it becomes too much for you to handle, you speak to a member of your HR team as soon as possible, and discuss your best course of action.