CocoIce Storms The Dancefloor with Rock Me on Her Birthday 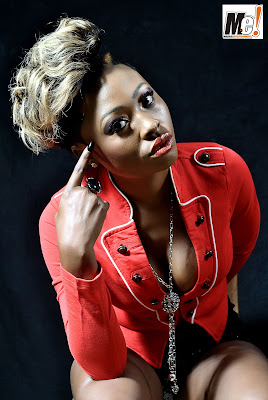 …Hit Location for The shooting of “It’s Me” Video.
Still basking in the euphoria of the wide acceptance and huge success her debut song and video “If U Don’t Know”, CocoIce is set to build on these trend by releasing 2 massive singles “It’s Me – Coded mix” and “Bad Guy” to finally establish herself and consolidate her position as a talented rap diva to contest with.
Poised to be the next biggest club banger of the year is the highly anticipated second official single “Rocke Me (Bad Guy)” from the mercurial rap diva, CocoIce.
CocoIce who some few months ago dropped her first music video for the hit song “If U Don’t Know – PonPonPon remix” which got rave review amongst the media and music lover is back with this fast tempo dancehall song.
According to her, “I did this song to show another side of me and to let people know

that I’m not limited to hardcore hiphop. “Rock Me (Bad Guy)” is for the streets and the clubs. It’s a fast tempo song which I strongly believe will get my fans and lovers of good music grooving on the dance floor”, she says.

MAGiKAL Entertainment, her record label also stated that they will be dropping the two massive singles “It’s Me – Coded remix” produced by H-Code and “Rock Me (Bad Guy)” produced by Young-D in few days time, precisely on the 30th of September, 2012 which coincidentally happens to be her birthday.
Though “It’s Me” had been leaked to the internet, it will be officially released alongside “Bad Guy”.
Also, arrangement is in top gear for the video production of “It’s Me” which will be shot by the fast rising and most-sought-after video director, Aina Matthew Abiodun of Reaction Production who shot CocoIce’s “If U Don’t Know” music video.
There’s a website (www.cocoicenaija.com) and online platforms via Facebook and Twitter where her fans can hook up with her and interact with her. The website serves as a porter to keep her fans abreast of latest happening as regards studio sessions, songs, videos, downloads, themes, wallpapers, pictures, merchandise, ringtones and online promotions.
According to MAGiKAL Entertainment CEO, Biodun Caston-Dada, “we are building CocoIceinto a global brand and not just for the Nigerian market alone through series of online promotions where fans can win various prizes such as BlackBerry phones, CocoIce Tank Tops/T.Shirts, Recharge Cards, Champagne, Movie Tickets, Hair Extensions/Weave-on”, he stated.
CocoIce has shared the stage with top acts like Mode 9, Sage, Late Dagrin, Minjin, T. Code, etc.
http://feeds.feedburner.com/OloriSupergal