Na wa oo!!! Iranian Woman Beats the Crap Out of Cleric for Telling Her to Cover Up 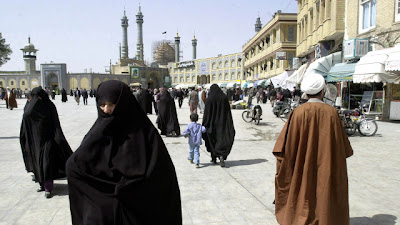 A cleric in Iran went crying to the country’s state-run Mehr News Agency after a run-in with a woman who responded to his repeated requests to cover up by kicking the crap out of him.

While walking to a mosque in the northern city of Shahmirzad, Hojatoleslam Ali Beheshti says he encountered a “badly covered” woman, and proceeded to “politely” order her to correct her outfit.

“You, cover your eyes,” the woman reportedly responded. He then told her again to cover up, at which point she decided she’d had enough.

“Not only didn’t she cover herself up, but she also insulted me,” the cleric told Mehr. “I asked her not to insult me anymore, but she started shouting and threatening me. She pushed me and I fell to the ground on
my back. From that point on, I don’t know what happened. I was just feeling the kicks of the woman who was beating me up and insulting me.”

A strict dress code for women has been enforced in Iran since the Islamic Revolution of 1979. Bloomberg says Iran’s female residents are required to wear head-scarves in public as well as drab, loose-fitting coats that obscure their curves.

Despite the beatdown, Ali Beheshti says “the worst day of my life” and three subsequent days in the hospital have not deterred him from doing his “religious duty.”