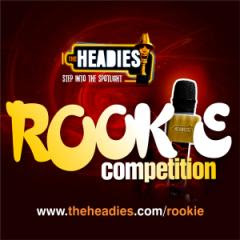 Nigeria's biggest and best organized music awards is back with something new. The Headies presents the Rookie Competition. The prestigious awards is giving one talented upcoming act, a once in a lifetime opportunity to perform on the big stage. Over the next week, members of the general public will suggest names of talented upcoming acts who meet the eligibility criteria of the Headies Rookie Competition.

On September 27, five shortlisted Rookies with the most suggestions will be announced on the Beat Fm's Midday Show with Toolz and voting commences immediately on the Headies Rookie Competition page. Voting will end on October 4, 2012.

The winner of the Headies Rookies competition will be announced on October 5, 2012.

1. Upcoming act must have never been nominated for/won any award categories at The Headies (including nominations at this year's event)

2. Upcoming act must have at least one officially released single in the Nigerian music market

3. Upcoming act must have no album(s) to his/her name released before February 2012

4. Upcoming act must be a citizen of Nigeria (not open to foreign nationals)