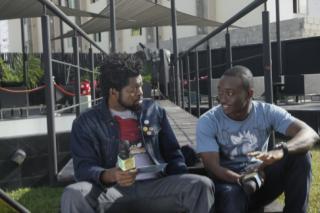 On this week’s episode of The Big Friday Show, Chocolate City’s Brymo and host, Basket Mouth performed to an excited studio audience.

Amidst the excitement, female fans threw underwear at the performing acts as they performed Brymo’s “Good Morning”.  Brymo and BasketMouth get a huge shocker as a male fan in the audience throws a pair of boxers at them.


The Big Friday Show – Teaser: Episode 13 from MTV Base Africa on Vimeo.

‘They can’t live without each other’: Robert ...