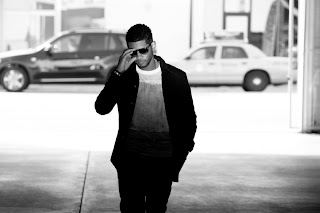 Sony Music Entertainment and  MComm, Nigeria’s leading entertainment and value added service company, have announced a historic partnership between both companies that will officially bring Usher Raymond’s hot new album “Looking 4 Myself” to Nigerian music fans.
Speaking in Lagos early this week, Mcomm CEO, Chidi Okeke, said “This is a landmark partnership, with Nigeria being the first West African country to have an official international release from a Grammy winning US artist.
Okeke is a leading industry expert in mobile technology and music content distribution.
‘We believe this will form a foundation for potential future strategic alliances with Sony Music. The album will be available nationwide from Friday, 29th June, as part of an

official release, in Compact Disc (CD) form. “Looking 4 Myself” will be sold in major cities like Lagos, Abuja, Port- Harcourt, Enugu, Ibadan, and will be available in designated album stores and retail outlets nationwide.”

“Music has and will always be the international medium of communication and Mcomm is all about delivering the very best of music, local and international, to music fans on our shores. There are also a number of exciting partnerships in the pipeline between Mcomm and other brands which are geared towards connecting Nigerians with their favourite music brands from everywhere in the world”, he added.
According to Usher Raymond, his seventh studio album, ‘LOOKING 4 MYSELF’ is “a record that really gives people an experience.”
Highly prolific artist, Usher Raymond   has been a music industry icon for many years, garnering numerous awards for his soulful ballads, heartfelt lyrics and pulsating dance steps. Throughout the years Usher  has continued to evolve, pushing boundaries ,breaking stereotypes and creating the kind of  popular music that millions of his fans all over the world know him for.
On this new album, the seven-time Grammy winner takes bold steps into unexpected musical territory. Assuming the most active role of his career as a songwriter, and working with a wide range of producers and collaborators—including Diplo, Swedish House Mafia, Max Martin, Will I. Am, and Luke Steele — one of the best-selling musical artists in history has blended electro dance beats with his signature, era-defining R&B, pop, and hip-hop sounds to create a style that goes beyond any defined category.
http://feeds.feedburner.com/OloriSupergal