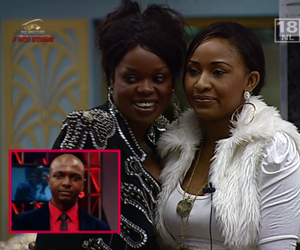 Last week, three people were put up for eviction. It’s been a stressful seven days since Mampi, Lady May and Maneta were nominated. Last night, Mampi was picked to leave the House. The Zambian star had the least votes and is the first Upville Housemate to go.

The show kicked off with a performance by Tanzanian hip-hop artist, Diamond.

IK told Maneta that she was safe, and at that moment, Mampi knew she was the one leaving. She gave the rest of the Housemates a hug and made her way out. Mampi then came onto the stage where she was interviewed by IK. The ex-Housemate said that she thinks Zainab has the potential to win because she’s “crazy.”