Tiwa Savage, Vixen, Lynx – A FAB Night Out together with Bacardi, Gorgeous Celebrities, and a Crazy DJ. 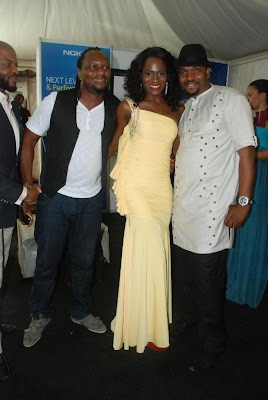 Fabulous people. Beautiful people. Talented people. Glamorous people. Special people. Fashionable people. And a crazy person (DJ Sose – the craziest J ever – see picture below) That’s how I would describe the
crowd that stepped out in style on Saturday for the FAB Awards.

But then, like every party, or in this case, every award show – there are certain characters who just know how to steal a great show, and replace it with an even more glamorous one. If the guests at the party were to be likened to cars, they’d all be luxury cars – beautiful cars, yet some would stand out like the Mercedes Benz S500 (which by the way bagged the award for  “Car of the Year”. So, let’s do a quick review…

Toolz! Wow! Why did some of the men stand up when Toolz strutted up the runway to pick up her award for
“On- Air Personality of the Year”? Your guess is as good as mine – but then they didn’t quite get what they were looking for – her outfit didn’t quite do that killer figure the kind of justice her ‘pvans’ were expecting.

So Lynxx beat Naeto C, D’banj, Bez Idakula, and Darey to cart away the “Most Stylish Artiste – Male” trophy – well, if it was unexpected by some, the young fella cleared everyone’s doubt when he walked up to pick his award – you could just see that the referenced style is really not in his clothes, but in his personality – his charm, his charisma, his poise, and here goes, his sex appeal. Speaking of stylish artistes – as expected Tiwa Savage pocketed the award quite effortlessly – come on, she’s such an eye candy, she put the sexy back in Nigerian music videos – and for that alone, even people who love Muna, Sasha, Asa, and Goldie would sneak a vote or two for Tiwa – at least, to secretly encourage the sister to amplify the fantasy her very presence on-screen inspires.

Most stylish actor went to Gideon Okeke of MNET’s Tinsel – well, against Jim Iyke, Ramsey Noah, Mike Ezuruonye, and Majid Michel – hmmm. If you’re saying “ahhh…ojoro” – just one question – whom did you vote for? Kate Henshaw-Nuttal bagged the female equivalent of Gideon’s award in absentia
– and deservedly so, I must say – ‘cause she knows how to rock style with simplicity.

TV Presenter of the Year! Wow! That was the highlight – all the heavyweights – Frank Edoho (Who Wants to Be a Millionaire), Adams Ibrahim. Efe Tommy, Eku Edewor (MNET’s 53 Extra/ Martini Sweetheart), and Yvonne ‘Vixen’ Ekwere of STV took it away – after the award, I thought I heard someone saying, “these awards organizers should learn to inform us of these nominations, so we can tell our fans to vote” – well – at least yougot great red carpet pictures and an endless supply of Bacardi cocktails–  so, your loss isn’t quite a total disaster. Maybe next time you’d be modest enough to actually “beg” for votes. Fans dey vex these days o! Don’t expect them to just up and vote you, if you don’t really ask for it.

Uti Nwachukwu aka Uti Martini picked up the award for “Model of the Year”, and his acceptance speech was one of the most curiously remarkable acceptance speeches my Bacardi soaked ears have heard in a while – he said something like, “I have to thank my dad for this award, since he died I’ve just been winning stuff, which mean he’s up there looking out for me” – awww…morbid and heart-wrenching at the same time.

In a nutshell, everything popped at the FAB Awards – and for the first time since I’ve been going for award shows – from the Oscars to the Grammys (abeg, just go with the flow and stop doubting my trips already),
I’ve never seen sexier or more gorgeous ushers or event assistants – did you see the figure on those Bacardi Babes? Damn! No wonder DJ Sose was doing some kung fu stunts at the Bacardi bar – me sef fit back flip from the back of that room to the runway, for a taste of what Bacardi gave them.

Now, you’re convinced I was one of those ‘pvans’ who stood up to watch Toolz catwalk to pick up her award, abi? Go figure.