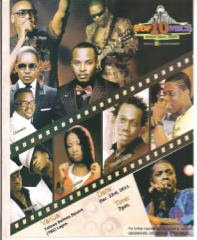 Upscale hangout and celebrities favourite Swe Bar will be hosting the 10 headliners of the much talked about concert of the year Top 10 MICS at a pre concert party on saturday 10th of December. The pre party concert is for friends, partners and strictly for the selected few to party, mingle, and dance exclusively to the songs of the 10 artistes on parade for the December 23rd concert.

The pre party concert will have the 10 artistes, industry stakeholders, media partners and lucky winners on twitter and via radio programme in attendance. Invited guests to the pre party concert will be selected via online promos and radio jingles.
Meanwhile ace comedian Ali Baba has been announced as the host for the night. Ali Baba who over the years
has gathered experience and has come to be regarded as the king of comedy will be bringing experience of over three decades to bear and he would be supported by Chioma of STV.

Meanwhile Koga Entertainment the brain behind the concert has assured that there will be no security concern as necessary steps are being taken to forestall any security breach.Also the gate fee for the concert has also been released; regular two thousand (2000naira), and three thousand naira (3000naira) at the gate on the day of the concert and ten thousand (10,000naira) for VIP.

The ten artiste billed to perform at the concert on the 23rd of December include African queen crooner Tuface Idibia, rave of the moment Wizkid, Port Harcourt first son Duncan Mighty, Knight house female singer Mo cheddar, Paramount King of Fuji, Abass Obesere, Afro Juju exponent, Sir Shina Peters, Femi Kuti, Chocolate City rapper, MI, P square, and Trybesmen hunch man, Eldee the don.
According to the organizer’s this concert is a departure from what is obtainable in concerts in Nigerian entertainment industry as most concerts only cater for hip hop and the youth market but this concert has come with a difference and it’s not only catering for hip hop, but also other genres of music ranging from hip hop to RnB, Fuji, Highlife, Dance Hall, and even Afro Juju.