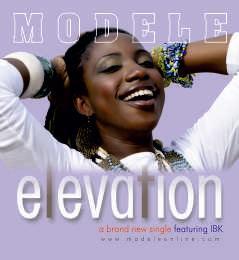 Soul Diva, Modele has taken another step to spring back into the music arena with a potential hit track produced by IBK Spaceshipboi.

The track, aptly titled Elevation song(that’s how the story goes), is an upbeat , hippy track that evokes strong senses of happiness, hope and encouragement and comes highly recommended for fans of Morning Songs to start the day or to keep the spring in the step of the listener all day long.

Modele, a diva in her own right, has until very recent times, been on a ‘limelight break’. The voice behind hit tracks such as ‘Adara’ and ‘Titi lailai’(which featured rap sensation, Sasha) has been doing a lot of recording in recent times and her fans can be assured of even better music, judging from the quality of her recent track, ‘Thankful’, which has been enjoying rave reviews from music buffs.

IBK is a fast-rising rapper, vocal instructor, singer and producer who emerged from the camp of Cobhams Asuquo’s CAMP(Cobhams Asuquo Music Production) and has delivered hit tracks such as ‘I Have a Dream’, his pilot single off his debut album due for release 2012. He was the winner of the Don Jazzy Enigma beat competition and supplied the hot beat for the BET naija rap cypher 2011 .

The result of IBK and Modele’s collaboration is this hard-to-classify, unique musical concoction, you can call it the 8th wonder!
http://feeds.feedburner.com/OloriSupergal