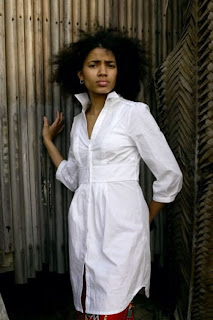 Nigerian-German singer-songwriter Nneka is set to release the ‘Soul is Heavy’ album, the follow-up to 2008’s ‘No Longer at Ease’, on 23rd September. The album mixes a number of styles including soul, hip-hop, reggae and African-pop and features vocal contributions from Ms Dynamite and The Roots’ Black Thought.

It is the singer’s fourth album and like the previous three, ‘Soul is Heavy’ tackles serious issues like war and poverty. The singer possesses a unique sound that perfectly displays soul and passion. Nneka cites artists such as Fela Kuti and Bob Marley as well as contemporary rappers Mos Def, Talib Kweli, and Lauryn Hill as key influences.

Nneka was born in Nigeria in 1980 to a Nigerian father and a German mother. After moving to Hamburg at the age of 18, she began to pursue a singing career while studying for a degree in anthropology.
In 2005, she released her debut album ‘Victim of Truth’, which received a great deal of critical acclaim. One of Nneka’s previous singles ‘Heartbeat’ – taken from her second album ‘No Longer at Ease’ – entered the Top 20 of the UK Singles Chart in 2009. The album mixes a number of styles including soul, hip-hop, reggae and African-pop with vocal contributions from Ms Dynamite and The Roots’ Black Thought.

Life Inside Maltina Dance All 5 Academy