OSG Admin
0
The news of their break up as a recording duo hit the ground with the endless Blackberry broadcast messages from colleagues and fans. The broad cast messages said due to irreconcilable differences, however A source close to them as exclusively informed us that it might as well be a publicity stunt to launch their solo careers as there was no ‘serious’  discord between them where they ‘vehemently’ announced terminating their relationship as a recording duo.
Source informs that: “I just left their house minutes ago, There are other issues but the major reason was to pursue their solo act ambition” 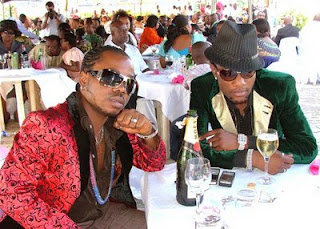 You should have bumped into the Blackberry broadcast that the flashy duo of the ‘Sengemenge’ fame have broken up as a unit due to irreconcilable differences, this happened earlier yesterday  and there goes their desire to own same cars and house. Also, who moves out for who since they live or use to live in the same house? We are guessing what the irreconcilable difference would be – the married one having an affair with a girlfriend of the unmarried but I think it is one being swindled by the other. Anyways, as soon as they speak we’d let you know.