“I was happy about Kemi Olunloyo’s arrest”- Comedian Seyilaw

Comedian Seyilaw is the latest to weigh in on Kemi Olunloyo‘s detention. He took to his Instagram page to disclosed how he was happy about her arrest. 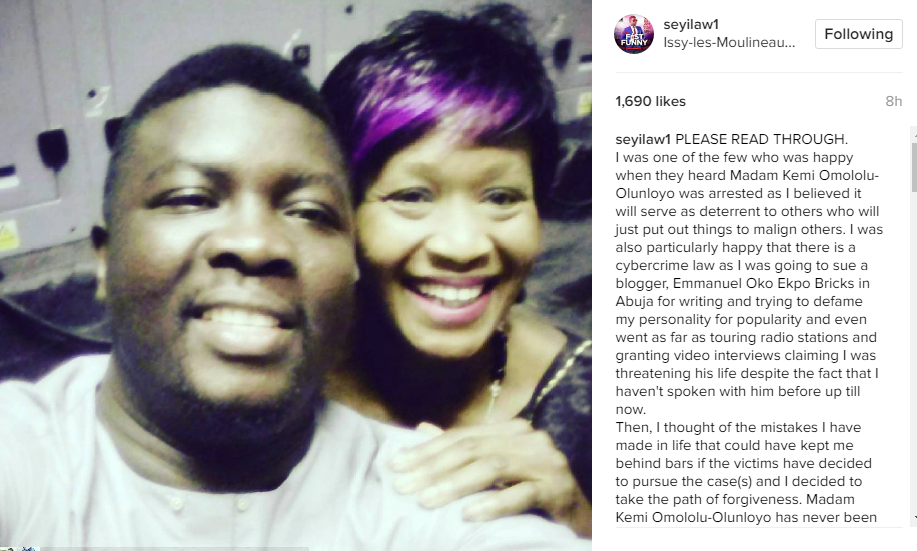 “PLEASE READ THROUGH.
I was one of the few who was happy when they heard Madam Kemi Omololu-Olunloyo was arrested as I believed it will serve as deterrent to others who will just put out things to malign others. I was also particularly happy that there is a cybercrime law as I was going to sue a blogger, Emmanuel Oko Ekpo Bricks in Abuja for writing and trying to defame my personality for popularity and even went as far as touring radio stations and granting video interviews claiming I was threatening his life despite the fact that I haven’t spoken with him before up till now.
Then, I thought of the mistakes I have made in life that could have kept me behind bars if the victims have decided to pursue the case(s) and I decided to take the path of forgiveness. Madam Kemi Omololu-Olunloyo has never been entirely right and we must acknowledge that and instead of just going after the Pastor, we must ask that he should be kind enough to forgive.
I don’t know if what Madam Kemi wrote about the Pastor was true, but what if it is not, we know what it means to have your character questioned, nonetheless we plead for his forgiveness. We can’t force it and so we plead for his forgiveness.
I have read from people shouting hell on the Pastor and I just laughed as I know what some would have done if it was them. Please don’t forget that we are Humans first before Pastoral call. I therefore, plead with whoever is behind the case against Madam Kemi Omololu-Olunloyo to forgive for Christ’s sake.
Thanks.”