JAMB announces the commencement of sales of forms

The Joint Admission and Matriculation Board (JAMB) has announced that the sales of forms for the 2017 examinations begins next week. The examination body made the known via their twitter handle, revealing March 2oth as the date of commencement. 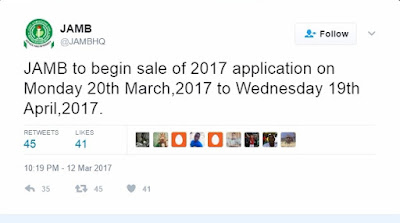 To mark Yemi Alade’s birthday today, here is a list of her top five songs

To mark Yemi Alade's birthday today, here is a list of her top five songs