A former Secretary to the State Government, Pastor Osagie Ize-Iyamu, has been declared the winner of the Peoples Democratic Party (PDP) gubernatorial primary held at the Samuel Ogbemudia Stadium in Benin, the state capital.

Pastor Osagie Ize-Iyamu, who was a strong APC chieftain and ‘engine room’ of the Oshiomhole administration for many years decamped from the All Progressives Congress (APC) in 2014 citing personal terms.

Oshiomhole disclosed this at the Samuel Ogbemudia Stadium while addressing the party delegates, the governor also disclosed that he has heard of a plan by the People Democratic Party, PDP, to rig the 2015 and 2016 elections in Edo State, adding that such attempt would be resisted as Edo people are not animals and will not be captured.

“Those who insisted that because they cannot get what they want, then they can move on. It is important that we assist them to move. Those who insist that no man is God who now affirmed that man is God, may man continue to be their God. Let me remind all of you that my fight to liberate Edo people is not a personal fight. Indeed, those who have moved on, they started fighting not on the basis of Edo people but over their personal ambition.” 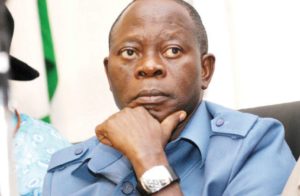 Ize-Iyamu polled a total of 584 votes to defeat his two other opponents.

The other aspirants, Matthew Iduoriyekemwen and Solomon Edebiri, had 91 and 38 votes to come second and third, respectively.

Ize-Iyamu, who was the state campaign coordinator of former President Goodluck Jonathan in the 2015 presidential election, was declared as the winner by the Chairman of the PDP Primary Committee and Governor of Ebonyi State, David Umahi, at about 4pm.

Umahi was accompanied by the Governors of Delta and Gombe States, Senator Ifeanyi Okowa and Ibrahim Dakwambo.

However, both Iduoriyekemwen and Edebiri staged a walkout prior to the announcement of the results.