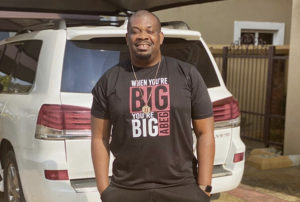 Nigerian music producer Don Jazzy has angrily reacted to a video of a protestor being attacked by some police officers after IGP announced the disbandment of SARS.

Even though the SARS unit under t he police force has been disbanded by the IGP, the brutalization hasn’t ended as some officers are still attacking and injuring innocent people.

Don Jazzy reacting to a video of civilians being attacked said it’s not yet over as he calls on all Nigerians to keep the same energy until everything comes back to normal.

According to him, the police will have to kill them all as they aren’t giving up until the change they demand is seen and an end is put to police brutality.

A post shared by ITS DON JAZZY AGAIN ? (@donjazzy)