Wizkid Drops Visuals To His New Single ’No Stress’ 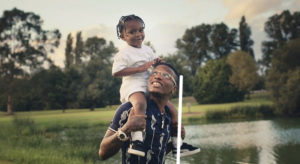 Wizkid has released the music video for “Smile” featuring H.E.R, one of the songs off his forthcoming album “Made In Lagos” set for release October 15th.

The video features several people, smile, skins, and appearance from his three sons, Boluwatife, Zion and Ayodeji. H.E.R was also in the video as the featured artiste.

The music video was directed by Meji Alabi.

If Someone Promises You Money, You Have ...