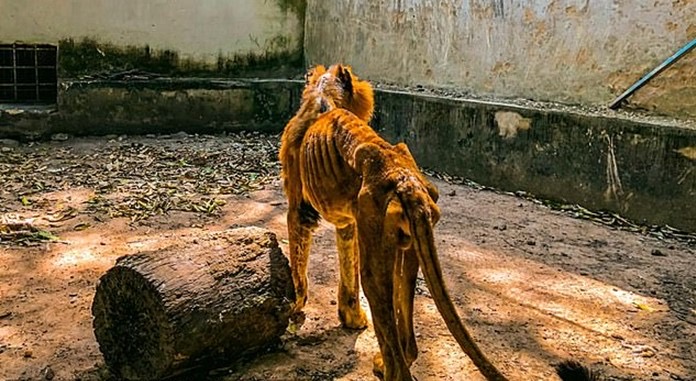 A starving lion whose photos went viral in November 2020, and raised concerns after seeing the state it was in, has reportedly died.

The plight of the lion whose skeletons were very conspicuous was brought to the fore by a local tourist who visited the Gamji Creational Park in Kaduna state. He secretly took photos of the bad state of the zoo which includes some malnourished animals and propagated it on social media.

He added this text to the footage he shared; “I was so surprised. I felt so nervous and uneasy because it was my first time seeing a lion live. This is my first time in a zoo. I virtually saw them in movies, news, and magazines. Actually, most of the animals in the zoo are not well-fed. They lack proper treatment or let me say-malnutrition.’’

On Wednesday, March 24, when Tribune Online visited the park to find out whether the lion has recovered, a staff of the park who craved anonymity disclosed that the lion died two weeks after going viral.

“Yes, I can confirm that the lion has passed on barely two weeks when its footage went viral. “Some veterinary doctors came to take the lion for treatment later, they came with the shocking news that the lion has died as a result of some complications,” the staff said.