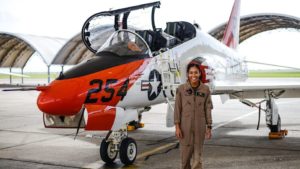 History has been made this week with the announcement that Madeline Swegle is set to become the U.S. Navy’s first Black female tactical fighter pilot. . She is set to formally receive her gold wings at a ceremony later this month as a newly minted Naval Aviato

The announcement was made on Twitter where the Chief of Naval Air Training saluted Swede with a “BZ” which stands for “Bravo Zulu,” a term used by the navy which means “well done.”

Swegle is a Virginia native who graduated from the U.S. Naval Academy in 2017. Her unit is currently the Redhawks of Training Squadron based in Texas. However, she will go on to be assigned to a team of strike fighters.

Her father, Carey Manhertz played basketball for the Navy.