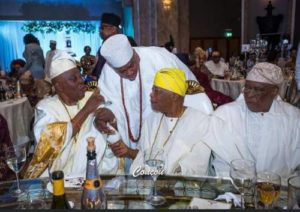 Two yet-to-be identified persons are alleged to have died of Coronavirus after attending the lavish and star-studded 80th birthday party of Nigeria’s Ambassador to the United Kingdom and Northern Ireland, George Adetola Oguntade.

The colourful ceremony, which took place on March 10, 2020, was held at the London Hilton on Park Lane, a posh area of UK’s most popular city – London.

Apart from the two guests alleged to have died of the virus after attending the event, one other attendee is said to be on ventilator at a hospital in London.

The development has since raised fears that scores of other attendees at the ceremony could have contracted the deadly virus.