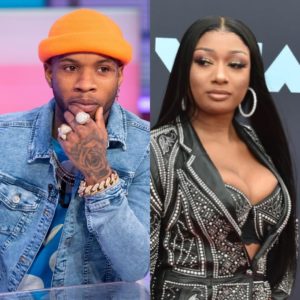 New information about the shooting incident on Sunday morning involving Tory Lanez and Megan Thee Stallion has surfaced after the Savage rapper revealed she was shot in the foot.

It was originally reported that  Megan Thee Stallion was taken to the hospital after she suffered a glass wound to her foot on Sunday. She was also with Lanez at the time of his arrest on a concealed weapon charge.

The Girls in the Hood rapper wanted to “set the record straight” and revealed that she “suffered gunshot wounds, as a result of a crime that was committed against me and done with the intention to physically harm me.”

TMZ reports that Lanez, whose real name is Daystar Peterson, opened fire in their chauffeur-driven SUV and shot Megan Thee Stallion in the foot twice after an argument broke out in the vehicle and the rapper and her friend, Kelsey Nicole, said they wanted to get out of the vehicle.

TMZ also reported that cellphone video of the shooting exists and law enforcement will examine the footage.