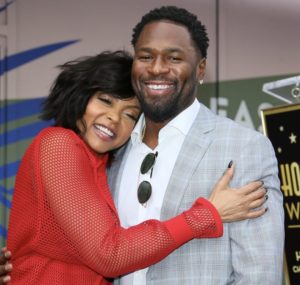 Taraji P. Henson and Fiancé Kelvin Hayden have ended their engagement, she confirmed the news during an interview on The Breakfast Club.

Taraji Henson revealed their breakup when answering a question from Charlamagne tha God about how women handle the drama from men in their relationships.

“I’m dedicated to the black man, y’all. I just turned 50 and I mean, I hadn’t said it yet, but it didn’t work out,” Henson said. “I tried. I was, like, therapy. Let’s do the therapy thing, but if you’re both not on the same page with that then you feel like, you’re taking it on yourself, and that’s not a fair position for anybody to play in a relationship.”

The couple was originally supposed to tie the knot this spring but postponed their wedding due to the COVID-19 pandemic. Henson also revealed they did attempt to make the relationship work before calling it quits. As a huge proponent of mental health in the Black community, Henson revealing that they did try therapy together wasn’t a surprise, but she went on to allude to the fact that ultimately it came down to happiness for them.

Nigerians Have Suffered So Much They See ...