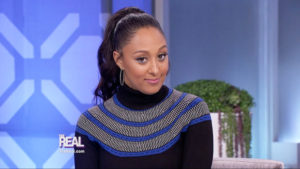 American actress and television personality Tamera Mowry-Housley announced on Monday that she will not be returning to co-host daytime talk show “The Real.”

Mowry-Housley had been a host, alongside current hosts Loni Love, Adrienne Houghton and Jeannie Mai, since the show began in 2013. The show tapes at Warner Bros. Studios in Burbank.

The actress and host said in an Instagram post that she will be pursuing other ventures and called the change “bittersweet.”

“For seven years, my home and heart has been at ‘The Real.’ The friendships that I’ve made there will last a lifetime, and the people that I’ve had the blessing to interview have changed my life for the better,” Mowry-Housley wrote.

“I’m so proud of what all the ladies and I have accomplished there, including two well-deserved NAACP Image Awards and a Daytime Emmy. However, all good things must come to an end, and it’s with a bittersweet smile that I announce that I am moving on from The Real,” she added.

“To my fellow hosts, I love you, I will miss you, and I will always be there for you. Thank you for teaching me, supporting me, and loving all of me. Sisters forever,” she continued. “I’ll be rooting for you, as I look forward to spending more time with my family, pursuing amazing new opportunities, and embarking on the next chapter of my life.”

Mowry-Housley said in the caption that she had “no intention” of sharing the news of her departure from the real on Sunday in light of recent news about the passing of her childhood friend and former “Glee” actress Naya Rivera.

Mowry-Housley said reports of her leaving the show were starting to spread and she wanted fans to hear it from her. 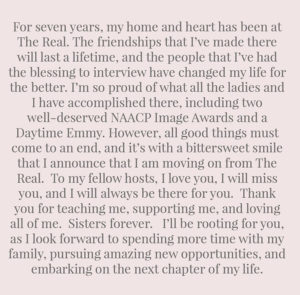