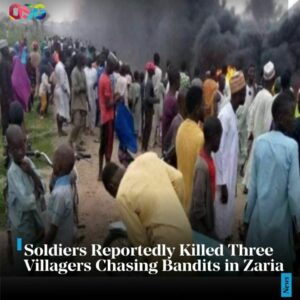 An uproar was caused in a community in Zaria as Soldiers reportedly killed three villagers who came together to stop the bandits from operating.

According to reports, the bandits invaded Kwanar Farakwai Village, in Igabi Local Government Council of Kaduna State, on 21st of July, in an attempt to abduct some villagers, but the youths armed with weapons (Local guns) pursued them.

It was reported that the criminals hid in a rock close to the town, the youths went after them and surrounded the rock in a bid to capture them.

Nevertheless, a company with its staff residing in the area, immediately contacted the Soldiers who arrived and reportedly fired at the youths that gathered together at the place without investigation.

The villagers stormed the rock and set it ablaze while requesting the arrest of the kidnappers who were still hiding in the rock.