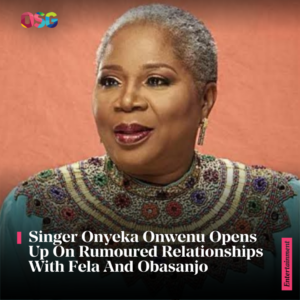 Veteran singer and songwriter, Onyeka Onwenu has spoken about her broken marriage and clarified false information about her.

Onwenu, in an interview with popular media personality, Chude Jideonwo, said the accusations that she slept with the former President, Olusegun Obasanjo, and had a secret marriage with him is false.

She further spoke about her marriage proposal from Afro-beats legend, Fela Kuti. She said, “Fela is a trickster. He knew I’d say no. I think it was his way of thanking me for coming out in support of him when he was jailed”.

The human rights activist also talked about her failed marriage and how she was emotionally abused. She also mentioned that she took the abuse for a very long time because of her love for her ex-husband and her children. however, when she couldn’t cope any longer, she had to opt-out of the marriage.

She said “Why did I take it for so long? Because I loved him and I loved my children and my children loved their father. So you make sacrifices because of the family.”

She added that “But there comes a time when you have to say, I’ve done enough of the sacrificing and if you really care about the children, you save yourself, because it could have killed me.”