A great medical landmark occurred at the Federal Medical Centre, Yola as a set of siamese twins were separated successfully at the hospital. 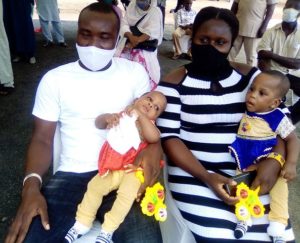 The Medical Director of the Federal Medical Centre, Yola, Professor Auwal Abubakar said, while speaking to pressmen, “We were getting set to do the surgery when COVID-19 came. It was a new disease and we were learning to cope with it. Many services at the hospital were suspended and even to get certain consumables was difficult.

“The separation was done on the 10th of August and there was no problem at all. We discharged them from intensive care on the third day. They are fully okay. This is the third separation we have done here in Yola. We did two when I was in Maiduguri (Maiduguri Teaching Hospital). So this makes the fifth that my team has done. In all the five, I have been the lead surgeon.”

The Secretary to the Government of the Federation, Boss Mustapha has also noted that the Medical Director deserves an award for his record of successes in separating Siamese twins in Nigeria