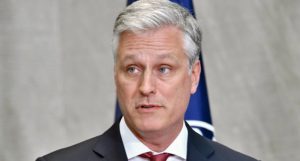 Donald Trump’s National Security Adviser, Robert O’Brien has tested positive for Coronavirus. According to Bloomberg News, this doesn’t pose any threat to the White House as Robert has been out of office since late last week.

Robert O’Brien reportedly caught the virus on a vacation with his family after his daughter became ill first. Robert has however gone into self-isolation at home while still running the National Security Council from home.