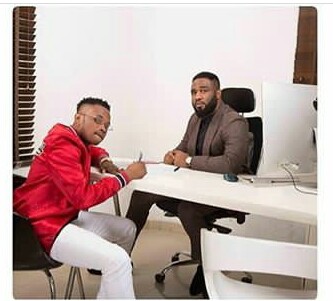 The Nigerian R&B songwriter, producer and singer, Praiz hit the limelight after he finished second runner-up at the maiden season of Project Fame West Africa. He is best known for releasing hit singles like “Rich and Famous”, “Sisi” and “I Love You”. He contributed guest vocals to Bez’s 2011 single “That Stupid Song”; the music video for the aforementioned song went on to be the first African video to make a world premiere on BET’s 106 & Park.

He took to his social media page to share a photo with his new artist with the caption:

“I just signed my first artiste, Congratulations @dapo_official on your signing ! Right from project fame till date I always knew u had the passion , determination, hustle spirit and Talent. Never let that change. Today I want to welcome you to my Team. Congratulations ???? #mynewsignedartiste #cicadda #x3m #yourisebyliftingothers”
Dapo is said to be working on an upcoming single.