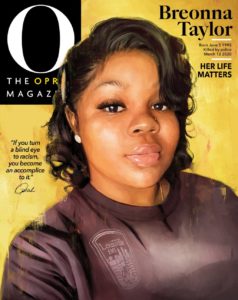 For the first time in the history of the Oprah magazine, Oprah Winfrey will not be appearing as the cover for her magazine. Instead, the September’s edition will be respecting the late 26-year old Breonna Taylor who was killed by police in March.

Oprah Winfrey already took to her Instagram page to announce this and wrote, “Breonna Taylor. She was just like me. She was just like you. And like everyone who dies unexpectedly, she had plans. Plans for a future filled with responsibility and work and friends and laughter.”

The intellectual personality, Oprah Winfrey, also mentioned that she thinks about Breonna Taylor a lot and that using Breonna Taylor’s as her September issue’s cover is another megaphone to cry for justice.