Former President of the United States of America, Barack Obama has sent his best wishes to Donald Trump and his wife Melania, despite the political battle between them. 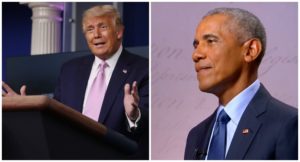 In his speech given at a fundraising event with the vice presidential candidate, Kamala Harris, Obama said “Although we’re in the midst of a big political fight, and we take that very seriously, we also want to extend our best wishes to the president of the United States, the first lady.”

“Michelle and I are hopeful that they and others that have been affected by Covid-19 around the country are getting the care that they need, that they are going to be on the path to a speedy recovery. We’re all Americans and we’re all human beings, and we want to make sure everybody is healthy,” he added.

Busola Dakolo Eulogizes Herself As She Celebrates ...