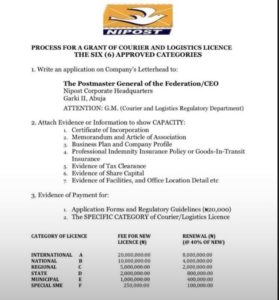 The new policy made by the Nigerian Postal Service has caused an uproar on Twitter as Nigerians are expressing their opinions on the unreasonableness of the policy as it would hamper the growth of small and medium businesses in Nigeria.

According to Donjazzy, a popular musician, the new policy was not well thought out as it would aggravate the struggles of many young Nigerians. See his tweet below:

This wasn't well thought out, I must say. It would only aggravate the struggles of many young Nigerians. How do we encourage them to be involved in economic building if we initiate policies that would hamper their businesses. The FG and @NipostNgn need to reconsider. pic.twitter.com/hM2EJt9NaR

Dr. Dipo Awojide, on Twitter called the attention of the Honourable Speaker of the House of Representatives, Femi Gbajabiamila and asked him to stop the implementation of the NIPOST’s policy. See his tweet below:

NIPOST should not be allowed to charge these ridiculous fees, @femigbaja. Thousands of young Nigerians have lost jobs in the last few months. Some turned to courier services. A friend who lost his job bought these from Oride. Please don’t let him commit suicide. #SayNoToNipostFee pic.twitter.com/p9j3Jz5BVl

A Twitter user, Oloye accused NIPOST of monopolozing the courier and logistics business and deciding to tax the competition out of the market. See his tweet below:

Let me get this straight.

NIPOST bought a bunch of bikes and decided to tax the competition out of the market. Effectively monopolising a business that serves millions of people.

This should be illegal and I'll be writing my reps in the National Assembly on it.