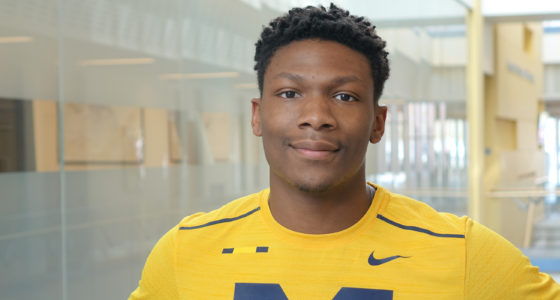 This week‘s edition of Glo-sponsored African Voices Changemakers will showcase two African star athletes who are increasingly making waves in the world of sports.

Twenty-three-year-old Uche Eke on Friday qualified to become Nigeria’s first Olympic gymnast at this year’s Olympic Games coming up in Japan in July.

Eke hopes that more youth will embrace Gymnastics as a sport which helps to build character, attitudes and habits that can have positive influence on their future life. He is a graduate of Computer Engineering from the University of Michigan, the United States of America.

On his part, Joshua Cheptegei is a twenty-four-year-old employee of the Uganda National Police. He has won a string of world records including the silver medal in the 10,000 meters event at the World Championship in London in 2017. He went on to set another world record for the 15 km road race, becoming the cross-country world champion in 2019. He set yet another record in the 10 km road race in Valencia, Spain, and became a world champion in the 10,000 meters race in the same year.

Cheptegei has equally set a world record as the tenth man in history to hold the 5,000 meters and 10,000 meters world records concurrently, both set in 2020. He is actively investing in Ugandan youths through the Joshua Cheptegei Development Foundation he created. The foundation introduces kids aged 16 and under are introduced to the sport of athletics.