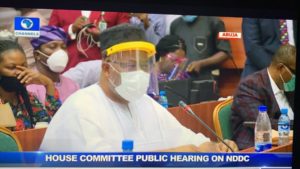 The Minister of Niger Delta Affairs, Godswill Akpabio has claimed that most of the contracts from the Niger Delta Development Commission (NDDC) were awarded to members of the National Assembly. He said this during the public hearing and interrogation by members of the House of Representatives Committee. However, immediately he mentioned this, a member of the panel immediately shouted ‘Order. It’s okay. It’s okay.”

The moment Akpabio dropped the bomb that most of the contracts of the NDDC are given to members of the National Assembly.

Next thing is :It's Okay, Honorable Minister

They are all the same; birds of a feather flocks together!

Senator Akpabio also disclosed that Joy Nunieh, the former Acting Managing Director of the Niger Delta Development Commission does not have a National Youth Service Corps Certificate as required by law.

#BBNaijaLockdown: Get Ready for the First Head ...