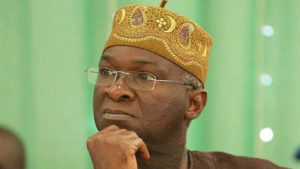 Nigerian politician and the Minister for Works and Housing, Mr. Babatunde Fashola has reportedly found a hidden camera at the Lekki Toll Gate, in Lagos.

Babajide Fashola found the hidden camera on the spot during a tour of the Lekki Toll Gate after the massacre on Tuesday, October 20 accompained by the Minister of Interior, Ogbeni Rauf Aregbesola and other government officials.

Fashola handed the camera which was picked by handkerchief to the Lagos State Governor, Babajide Sanwo-Olu to undertake forensic analysis and investigation.

“I think this will help with the ongoing investigations into the shootings at the Lekki Toll Gate.

“It requires forensic analysis and could be used in the investigations to unravel the mystery surrounding the shootings at the Toll Gate, I believe.”