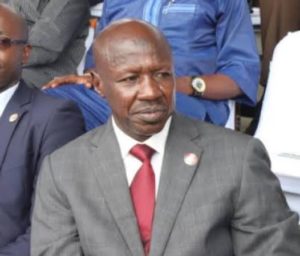 The Peoples Democratic Party has demanded for the effective and full prosecution of the acting EFCC Chairman, Ibrahim Magu. This was said via the National Publicity Secretary of the Party, Kola Ologbondiyan who signed a statement which reads, “Magu’s indictment reinforces its position that the much-hyped war against corruption by the Economic and Financial Crimes Commission (EFCC), under his watch, has been a huge scam by corrupt individuals to cover the plundering of public resources, harass political opponents, intimidate and extort money from innocent Nigerians.

“The development has also exposed why corruption has worsened under the Buhari administration, as documented by credible international organizations, including Transparency International (TI).

“It is a big embarrassment to our nation, that the head of the anti-corruption agency in an administration led by the African Union (AU) anti-corruption champion and which prides itself on zero tolerance for corruption, is being dragged in allegation of looting recovered fund and other barefaced frauds.

“Now that the racket has been exposed, the onus lies on President Muhammadu Buhari to clean his Augean stable by not sweeping the matter under the carpet or seeking to provide a soft landing for the indicted EFCC boss and shield him from prosecution.”