Kanye West Visits Hospital After Apologising To His Wife Kim Kardashian, For Publicizing Their ‘Private Matter’ 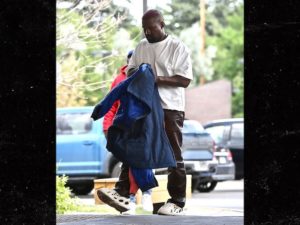 American rapper, Kanye West paid a visit at a hospital in Wyoming days after apologizing to his wife Kim Kardashian for publicizing their marital issues.

Kanye West was spotted at the Cody Regional Health to seek treatment for his anxiety on Saturday afternoon, July 25, 2020.

A report by TMZ revealed that the US presidential aspirant could not get the treatment he went there for because the masses embarrassed him making it uncomfortable to remain at the hospital and eventually had to leave.

After Kanye West his home in a private jet, an ambulance with EMTS later arrived at his ranch to undertake the necessary health checks such as his heart rate and blood pressure and concluded he was in good condition.