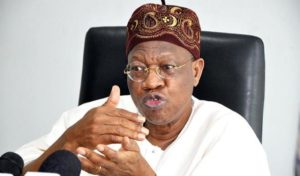 Nigeria’s Minister of Information and culture, Lai Mohammed has reportedly charged the Nigerian Broadcasting Commission (NBC), to take off the airing of Big Brother Naija from television.

According to the Cable, the NBC was to cite the spread of COVID-19 as the reason for the pull down of the reality show on television stating that it is a directive from the presidential task force (PTF).

The Information Minister is reported to have used the NBC to shut down BBNaija because of allegations by most Nigerians that he wants to send MultiChoicee Limited, the organizers of the popular show out of Nigeria.

A director is said to have reminded the meeting that NBC had already sought explanation from Multichoice on a possible violation of COVID-19 protocols with the airing of the show.

The letter was sent on July 1, before the show began.

MultiChoice replied with detailed explanations on measures taken in collaboration with the Lagos state government, whose agency, Lagos State Safety Commission, gave the green light for the show.