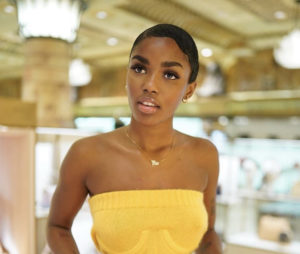 Eva Apio well known as Evss has debunked rumors that she was having an affair with the popular Nigerian artist Davido when his girlfriend Chioma was pregnant with Ifeanyi.

The drama of Davido’s alleged relationship with the British model, Kenza who happens to be the former best friend of Evss. Kenza called out Evss out in a series of tweets about how she went along with Davido to Greece to have fun where she was treated like an escort.

Kenza accused Evss of flirting with Davido when she knew his fiancée Chioma was heavily pregnant with their child Ifeanyi. She also insinuated that Evss used Davido to pave ways to the top by sleeping with men.

Reacting to the tweets of Kenza, Evss debunked claims, and accusations leveled against her. According to her, she never had an affair with Davido.

“I was gonna bite my tongue but I can’t let my name be dragged like this. No I did not have an affair with davido, I was seeing tycoone. Not david! and she knew this but she decided to tweet and delete. She’s pushed that narrative, yet it’s not the truth.” 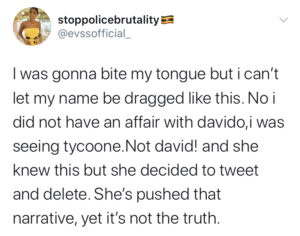