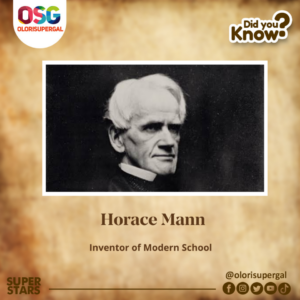 Horace Mann was born in Franklin Massachusetts in 1796. He was a college professor of the subject Latin and Greek, he was also a college president.

However, despite many school methods and teaching methods before Mann, the credit for the contribution and invention of the regular school system in 1837 goes to him. Also, the educational historians call him The Father of the Common School Movement.

Mann grew up in an environment ruled by poverty, hardship, and self-denial. He was taught briefly and erratically by comparatively poor teachers, but he managed to educate himself in the Franklin town library, and, with tutoring in Latin and Greek from Samuel Barrett (later a leading Unitarian minister), he gained admission at the age of 20 to the sophomore class at Brown University (Providence, Rhode Island).

He did brilliant work at Brown, manifesting great interest in problems of politics, education, and social reform; his valedictory address, on the gradual advancement of the human race in dignity and happiness, was a model of humanitarian optimism, offering a way in which education, philanthropy, and republicanism could combine to allay the wants and shortcomings that beset humankind.

Upon graduation in 1819 Mann chose law as a career. He read law briefly with a Wrentham, Massachusetts, lawyer, taught for a year at Brown, and then studied at Litchfield (Connecticut) Law School, which led to his admission to the bar in 1823.

He settled in Dedham, Massachusetts, and there his legal acumen and oratorical skill soon won him a seat in the state House of Representatives, where he served from 1827 to 1833. There he led the movement that established a state hospital for the insane at Worcester, the first of its kind in the United States. In 1833 he moved to Boston, and from 1835 to 1837 he served in the Massachusetts Senate, of which he was president in 1836.

Of the many causes Mann espoused, none was dearer to him than popular education. Nineteenth-century Massachusetts could boast a public school system going back to 1647. Yet during Mann’s lifetime, the quality of education had deteriorated as school control had gradually slipped into the hands of economy-minded local districts. A vigorous reform movement arose, committed to halting this decline by reasserting the state’s influence.

The result was the establishment in 1837 of a state board of education, charged with collecting and publicizing school information throughout the state. Much against the advice of friends, who thought he was tossing aside a promising political career, Mann accepted the first secretaryship of this board.

Endowed with little direct power, the new office demanded moral leadership of the highest order and this Mann supplied for 11 years. He started a biweekly Common School Journal in 1838 for teachers and lectured widely to interested groups of citizens. His 12 annual reports to the board ranged far and wide through the field of pedagogy, stating the case for the public school and discussing its problems.