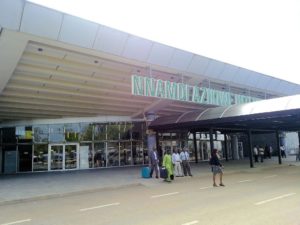 The Federal Airports Authority has called out the head of the Department of State Services (DSS), Safiyanu Abba for slapping an aviation officer and for breaching its security protocols at the Nnamdi Azikiwe International Airport

According to FAAN, the aviation officer was only performing his duty when he called the DSS boss, Safiyanu ABBA to desist from obstructing all airport security processes; an act which got the officer an unwarranted slap from the DSS boss. The Federal Airports Authority of Nigeria has condemned the act of Safiyanu Abba, and named it an abuse of power on the part of the DSS boss.

We note with dismay that Mr Safiyanu Abba, the Head of DSS at NAIA deliberately obstructed airport Security process, and slapped an Aviation Security Officer..

Nigerian Singer Runtown Is Engaged to One ...