#EndSARS: The Journey Of Nigerian Wanting Their Voices Heard. 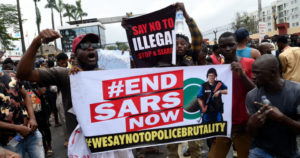 #EndSARS protest is a social movement in Nigeria that started on Twitter calling for banning of the Special Anti-Robbery Squad, a unit of the Nigerian Police Force. It is a call to end police oppression, brutality and extra-judicial killings by SARS operatives in Nigeria.

The concerned citizens of Nigeria came out to protest on Thursday, 8th of October 2020, led by Musicians Runtown and Falz and since then citizens from different states in Nigeria and in diaspora have joined in the protests making their voices heard.

On Sunday 11th of October the IGP announced the dissolution of SARS, and also stated that new policing arrangement for tackling the offenses of armed robbery and other violent crimes will be unveiled to the public adding that all police officers and men serving in the SARS unit will be deployed to other police commands, formation, and units as they deal with those found guilty of brutalizing citizens, some citizens didn’t accept this, as they said the same SARS operatives would still be working if they redeploy them to other police departments.

On Tuesday 13th October the IGP announced the new police unit to take over from SARS as Special Weapons and Tactics (SWAT) team, which started the another level of request from the citizens as they say they don’t want the SWAT team as well, citizens are still out protesting nationwide until their voices are heard.

At least 10 people have died, and many injured during this peaceful protests over police brutality in Nigeria as the SARS officials are still out shouting at protesters.