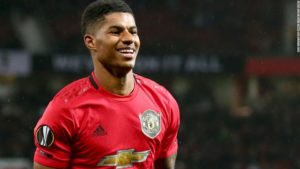 The protest against SARS in Nigeria has become a global one as almost everyone is adding their voice to fight for the right of the civilian to live.

Manchester United forward player Marcus Rashford has also added his voice to the protest in Nigerian fighting against the brutality of the police.

According to him in a post online, his thoughts and prayers are with all those affected by the brutality of the police as he calls for the end of SARS.