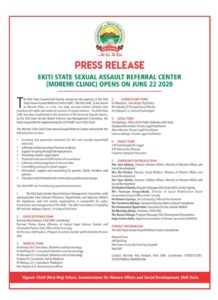 The Ekiti State Government has made another move against the rape culture by establishing a State Sexual Assault Referral Centre (SARC). This Centre would serve as a one-stop, survivor-oriented initiative that prioritises the rights and needs of survivors of sexual violence in the state, among other services.

These other services include:

The Ekiti State Governor, Kayode Fayemi and the First Lady, Bisi Fayemi are fulfilling their promises in eradicating the rape culture in the state through the Ekiti State Gender-Based Violence Law Management Committee, a body which is chaired by the First Lady herself.

UPDATE: The Government of Ekiti State has established the State Sexual Assault Referral Centre (SARC) to serve as a free, one-stop, survivor-centred initiative that prioritises the rights and needs of survivors of sexual violence. #StateOfEmergencyGBV #SayNoToSexualViolence pic.twitter.com/0PM4Y0xNAm