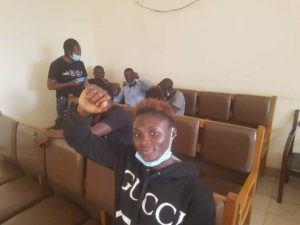 Some #ENDSARS protestors are to be remanded in prison after the court-ordered as they were arrested for protesting at the National Assembly complex in Abuja on Friday, November 6.

According to reports, a magistrate court sitting in Abuja yesterday ordered that the five persons who participated in the #ENDSARS  protest be remanded at a correctional center until 25th January 2021 when the case was adjourned to.

Recall that on Friday that the publisher of Sahara Reporters, Omoyele Sowore shared photos and videos online alleging that he and some protesters who stormed the National Assembly to paint EndSARS graffiti on the road leading to the Assembly were attacked by policemen and five of them were arrested.

Omoyele also posted on Facebook, disclosing the arrested protesters were arraigned before a Magistrate court and the court denied them bail and ordered that they be remanded in prison custody till next year.