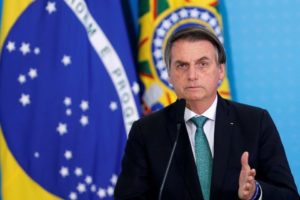 The controversial politician, who has downplayed the risk of Covid-19 and insisted the negative economic impacts of social isolation will be worse than the harm caused by the virus, announced live on television that he had tested positive after feeling unwell.

He took his fourth test, on Monday after developing symptoms, including a high temperature.

Mr Bolsonaro made the announcement in a TV interview on Tuesday. He said the fever he had been experiencing had gone down and that he felt “very well”.