Big Brother Naija housemates, who were once romantic partners Tobi and Cee-C, with the help of other housemates, have decided to settle their differences. 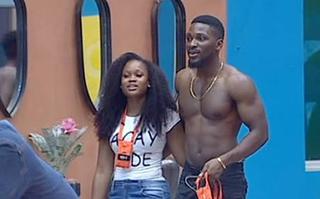 Alex, Lolu and Khloe decided to help these two former lovers come together to talk.

Alex, the head of House, took it upon herself to orchestrate Tobi and Cee-C’s reconciliation.

Like she had done for Miracle and Nina in her capacity as the House head, Alex found it her responsibility to also bring about a ‘ceasefire’ between Cee-C and Tobi.

On Thursday, while lying in bed with her buddy Tobi, Alex encouraged him to go talk to Cee-C to put their differences aside.

Earlier, Lolu had found it saddening that these two who had started the whole romantic game in the House, had so dramatically fallen apart.

Yet, no housemate had failed to notice that Cee-C couldn’t help glancing at Tobi when she thought no one was watching.

Since Tobi holds Alex’s friendship in high esteem, it was a no brainer for him to follow up on her advice and go find Cee-C.

For over three hours and until the early hours of the morning, the two went over their respective arguments, alternatively blaming and taking responsibility for their past misdeeds and miscommunications.

Cee-C said she would need to watch the entire BBNaija show again to identify their shortcomings; while Tobi said he felt like he wasn’t himself when they were together.

Their long overdue talk ended up on a good note, even though they both seemed to agree that a friendship outside the House was impossible.

BANTU CREW GETS NOMINATED FOR 2018 HEADIES