Pere has emerged as the head of house for week three, in the Big Brother Naija season 6 reality TV show. 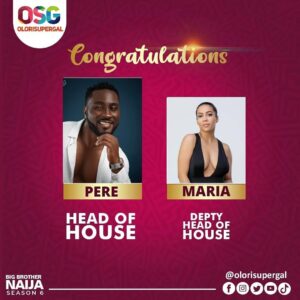 He was named the head of house after he won the HOH challenge. He picked Maria as his deputy for the week.

Biggie gave unrestricted visits from housemates to the Head of House lounge, however sleeping over isn’t allowed.

As expected, the head of the house and his deputy have immunity from nomination and eviction this week.