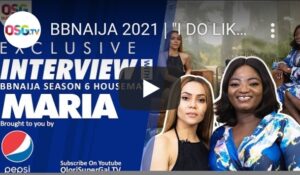 Maria Chike Agueze Benjamin is the eighth housemate to be evicted during the live eviction show of Big Brother Naija season 6 on 29th August 2021.

In her interview with Sergeant Olori, Maria talked about her feelings on the day of eviction and how she felt immediately she walked out of the house to meet the show host, Ebuka Obi-Uchendu.

Recall that Maria was one of the two wildcards that were put in the show alongside other housemates. She would have been evicted in the first week of the show if the housemates had been able to figure her out.

She spoke about the kind of friendship she had in the house with pere and their time together while he was head of the house.

Speaking about WhiteMoney, maria noted that she doesn’t have anything against him, and she never campaigned for him to be removed from the kitchen. However, it was a coincidence she has the same thoughts as Pere about WhiteMoney’s continuous stay in the kitchen.

Furthermore, spoke about the issues she had with Angel while she was head of the house.
She noted that whatever discussions she had with other housemates about Angel in the house are just her observations and they are based on character flaws.

Putting out her side of the misconception social media has portrayed on people’s minds is a must-watch.